A deeper look at the Tweet analysis focuses on the actual language and wording used by the fans when discussing Pride Night.

First, we mapped out the overall rate of positive and negative sentiments in those tweets. Note that some teams may appear in these charts but not the Survey charts due to a low number of survey responses. Also note that results may be skewed for teams with lower Twitter activity, as each individual tweet accounts for a larger percentage of the overall activity. These teams are ordered by the number of fan tweets, from fewest to most.

Because Tweets may have more than one sentiment, the total percentage may equal more than 100%. 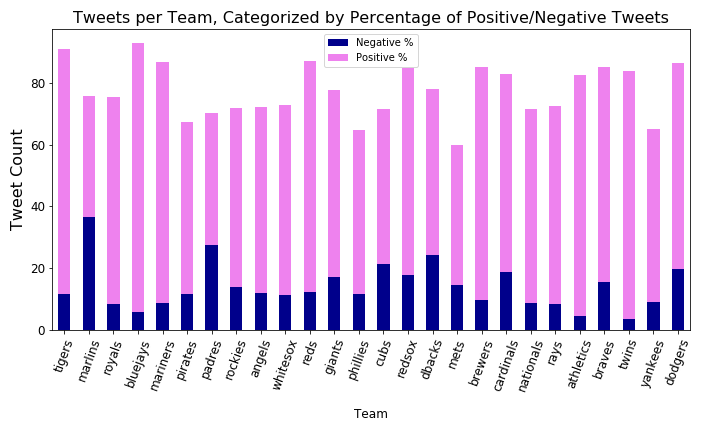 A team's win/loss record seemed to have no particular bearing on the overall sentiment scores; we see high rates of both positivity and negativity from teams with winning and with losing records. However, the teams whose survey responses trended towards the negative also exhibited negative Twitter sentiments.

We performed a "bag of words" analysis on the Tweets and survey responses, grouped by positive or negative sentiment, and visualized the most common words.

Positive sentiments often had tones of inclusion, community and belonging, although some comments that trended overall towards the positive also expressed concerns over MLB's motivations: are they doing this because they genuinely embrace the LGBTQ community or is it just marketing?

The most frequently named person amongst the negative sentiments was Donald Trump. The most freqently named person among the positive sentiments was Sean Doolitle, a pitcher for the Washington Nationals (formerly Oakland Athletics) who, together with his wife Eireann Dolan, is outspoken in his support of the LGBTQ community. Comments from the Washington and Oakland fan bases both lean heavily towards positive.

While there isn't enough information to determine how much of that trend is due to regional demographics and how much is influenced by player commentary, it's undeniable that fans notice the support of the player(s). The influence of the President's personal beliefs is unmistakable, both with the current President, and with Presidents in general. Star athletes and famous politicians both have powerful megaphones. Encouraging more players to publicly support Pride Night initiatives can be a factor for teams who wish to build a more inclusive fan base.

Double click the words in the word clouds to re-focus and zoom.